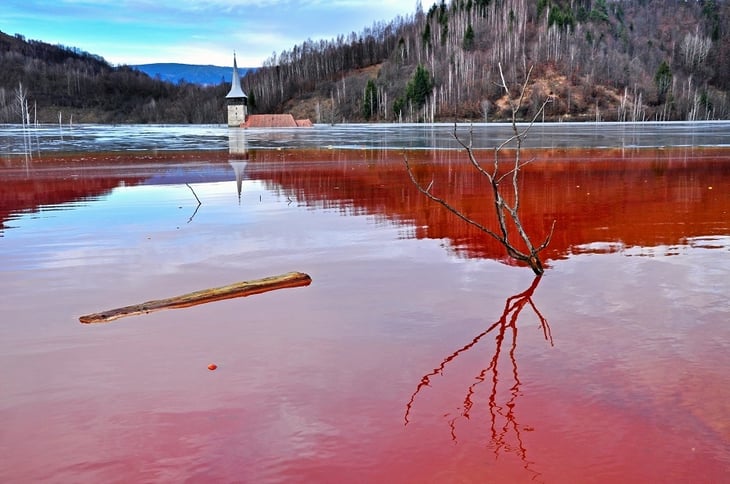 When mining operations finish up and everyone's gone home - what remains? In terms of environmental liability: quite a bit. Found in the swirling hues of the surrounding soil and water, plastered against the grays and browns, are the vibrant colors of mining pollution.

Within the whole of the mining industry, there lies an incredible range of potential liability. Common copper, sulfur and gold mines can release elements that are incredibly destructive to the surrounding ecosystem if not handled properly. The most immediate liability comes in the form of acid rock drainage - the acidic liquid runoff that is formed when surface and groundwater become contaminated with sulphide minerals. When sulphide is unearthed and exposed to oxygen throughout the mining process, it quickly oxidizes and becomes highly acidic. The resulting pool of sickly bright acid water leaches heavy metals from the surrounding rock, causing the vitriolic mix to become even more damaging to the surrounding environment.

Take the case of Lafayette Mine, situated in the Albay province of the Philippines. Lafayette was a polymetallic mine designed to be a showcase of the underground wealth that the Philippines islands had to offer. Within the year of its opening, the surrounding area was a disaster. The opening of the mine was built beside a creek that led directly to the Albay Gulf, a hotbed of marine life and a recognized hub in the migratory path of whale sharks and five of the seven species of marine turtle. In other words, a wholly undesirable place to open a mine. The acidic runoff ran into the Gulf, corroding the ancient coral systems and decimating bottom-dwelling marine life. The ocean eventually neutralizes the acid, though the remaining oxidized precipitate - called ochre - still poses a threat to fish that eat the small, gleaming metals. 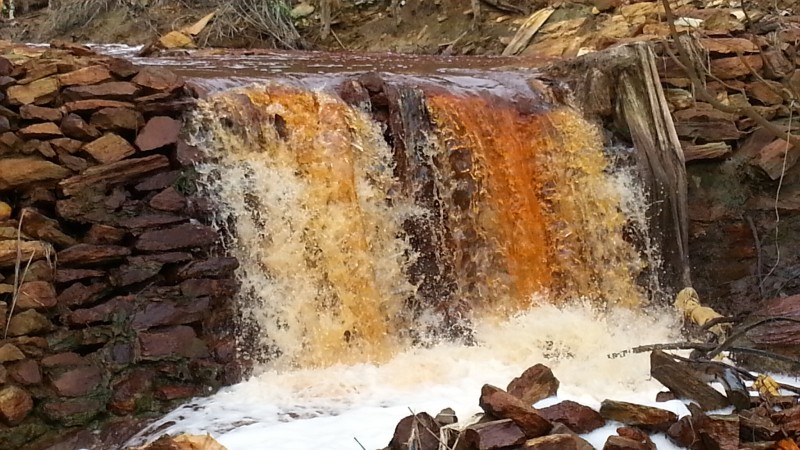 A contaminated creek in Rapu-Rapu makes its way to the ocean. (Source: Kalikasan People's Network for the Environment)

The damage of acid rock drainage can be mitigated by neutralization techniques, though attempting to treat the runoff at the source usually has mixed results. Even if the acidic runoff is neutralized as it enters the creek, the resulting ochre blankets the bottom of the riverbed - thus the small benthic organisms that feed on nutrients from the riverbed floor can no longer sustain themselves. These small animals are a key part of the river's food chain - and the depletion of their population causes ripples of imbalance that threaten bigger fish. It doesn't help that the most common (and cheapest) method of neutralization is crushed limestone - an additive which only adds to the precipitate content of the waterway.

Isolating and containing acidic runoff can be notoriously difficult. Treating and disposing of it can be expensive. For now, it remains a serious problem - and the sight of the brightly-colored toxic stream creeping through the wild can be a sharp reminder of how the environmental liabilities of mining can bring about the ruin of an ecosystem if left unaddressed.

"Rapu-Rapu Island was once so beautiful. It was like paradise." says Antonio Castitas, a 74-year old Rapu-Rapu resident. "Our lives there were simple — we lived off nature, and we took care not to damage it because we knew it was the source of our livelihood and means of survival. When the mining companies came, everything changed. Now, 97 percent of Rapu-Rapu Island is virtually under the control of these environmental destroyers, and what was once paradise is a wasteland."