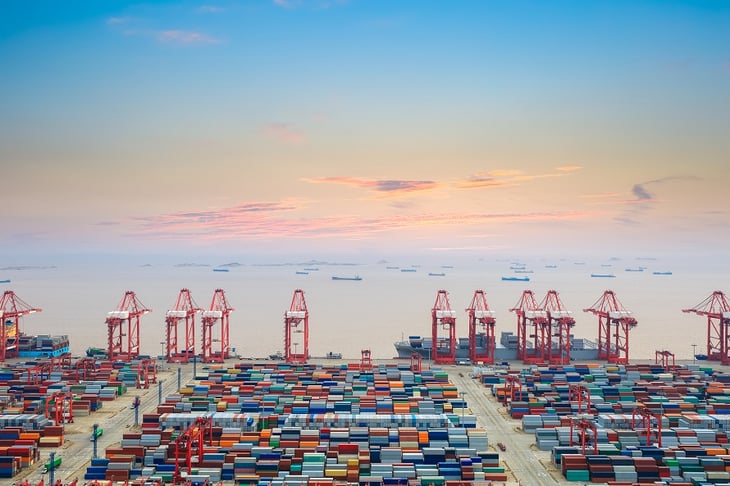 Behemoths Of Emission: How A Container Ship Can Out-Pollute 50 Million Cars

At 1300 feet long, it's not hard to notice the gargantuan profile of a container ship. Even miles out, their immense silhouettes are easily spotted against the horizon. What is less visible is the near-unfathomable amount of sulfur emissions generated by a single container ship - an amount equal to the emissions of 50 million cars. For perspective: The 760 million cars that are currently operating worldwide emit as much sulfur dioxide as 15 container ships running at full capacity. There are currently over 6000 massive container ships operating globally and 85,000 commercial cargo ships on top of that. 1

You'd imagine that something this dangerous would have appropriate regulations in place - but the truth is unfortunately complicated. For ships at open sea, it's pretty much an emission free-for-all. Countries like the US and Canada have tried to mitigate the effects of container ship emissions with coastline restrictions that take effect once the ship is within 200nm of the shore.2 However, with a total lack of international regulations, the massive ships aren't liable for any pollution once they hit jurisdiction-free waters.

The fact is that container ships usually run 24 hours a day for weeks on end - but that alone doesn't explain the unbelievable amount of sulfur spewing out of the ship smokestacks. To understand the depths of the environmental threat brought upon by these ships, we have to realize that all fuel isn't equally noxious - a point hammered home by looking at the contents of a shipping barge's fuel tank.

Marine heavy fuel or "bunker fuel" is essentially the lowest grade of liquid fuel in use, with some likening the thick, brown-black sludge to liquid asphalt. Containing 2,000 times as much sulfur as standard automobile diesel, bunker fuel is what's left over when all of the cleaner types of fuel have been extracted from the crude oil. It's also worth noting that when this stuff ends up in the ocean due to spill, it's extremely harmful to marine life and extremely hard to clean up. Environmental organizations from all over the world have called for a ban on bunker fuel, but for now - it's still in currently in use.

A study by the NOAA (National Oceanic and Atmospheric Administration) found that the particulate matter exuded by container ships has contributed to over 60,000 premature deaths per year.3  "When the particles get down into your lungs they can cause inflammation," said NOAA researcher Daniel Lack. "You can actually induce heart-type illness as well." The health dangers are most present around heavily trafficked areas like the Mediterranean, India and East Asia - but because of crosswinds, the clouds of container ship exhaust often protrude past the coast of Florida, causing serious damage on human health as well as the ecosystem.

It's a hard problem to fix. To halt the pollution of all 90,000 ships would require a global emissions policy - and even a strict, swiftly-enacted policy would critically damage international trade. There is good news, though: Thanks to the EPA, a new law requires all new ships built past 2016 to be built with advanced emission control technology in their engines - a huge step up from the lumbering, belching black engines that occupy present-day container ships. Also, low-emission zones are popping up in Europe, with the Baltic Sea and the North Sea having been deemed emission-restrictive areas. As far as fuel goes, researchers are exploring several alternatives to bunker fuel - the best of which is LNG (Liquified Natural Gas). LNG has the capacity to replace bunker fuel, though it would require a new working infrastructure - something not exactly attractive for developing countries.  Even a successful implementation of LNG wouldn't reduce carbon dioxide levels enough to totally nullify the effect of marine transport on climate change.

Awareness surrounding the giant of marine transport pollution is growing, but the definitive solution lies still somewhere past the horizon.

Curious about how your company can effectively manage its environmental liabilities? Give us a call at (888) 838-7765 EXT. 15 or check out more details here!

For more info on alternative marine fuel, check out: http://www.dnv.com/binaries/PositionPaper_AltFuels_280214_tcm4-592866.pdf