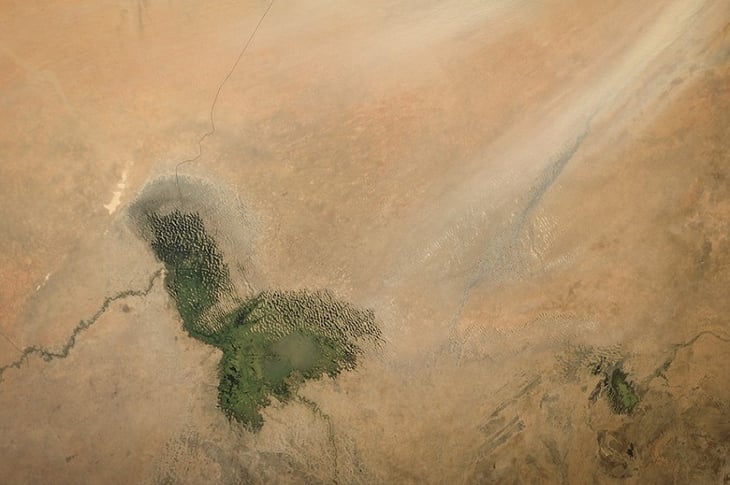 In West Africa, near the borders of Cameroon and Niger, sits Lake Chad - though the sandy, dry air surrounding the area is more evocative of a dustbowl than a lake. Now essentially a basin, Lake Chad has all but vanished over the last 50 years.  In 1963, the surface of Lake Chad was measured at 25,000 km2. After a colossal 95% shrinking in volume over the years, today's surface area is measured around 1,350 km2. Described as "an ecological catastrophe" by the United Nations, Lake Chad has seen its shores dry up due to climate change and short-sighted water management efforts. What remains is a brutally visible case of how a rise in global temperatures can disrupt an ecosystem.

Locals native to Lake Chad have seen rainfall levels steadily drop between 5-10 mm a year - and while it isn't the sole catalyst for Lake Chad's disappearance - global warming is a huge reason for why great lakes around the world are slowly shrinking.1 After 4 decades of recurring droughts and declining rainfall levels, the landscape in West Africa has vastly changed. What was once considered an oasis is now itself a desert. Not only does a drier climate organically desiccate the lake, it calls for the increased usage of water in local agriculture - water that is sourced directly from Lake Chad. This conjunctional dwindling in water resources ends up decimating local wildlife populations -giraffes, striped hyenas, western kob, bushbuck and sitatunga are now considered extinct in the Chad area.2 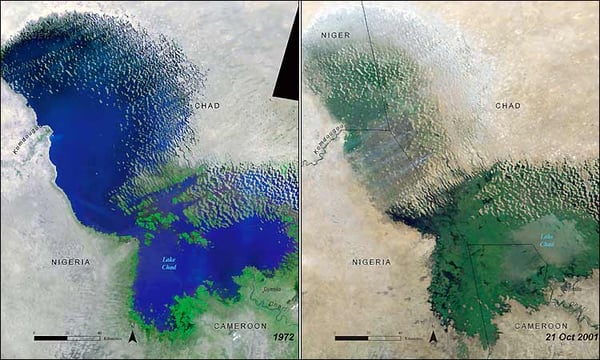 Along with wildlife, fishermen are becoming rarer and rarer around the borders of Lake Chad. Surface fishing has seen a massive decrease in yield, so some fishermen will opt for creating miniature fish farms within depressions in the lake bed. They allow the fish to grow before harvesting them, and it makes for some relative success when compared to trolling the razed lake surface - but the size and variety of the fish is a faint shadow of what fishermen were catching out of the massive Lake Chad of 50 years ago. These days, a day's catch nets about 750 naira (4$), whereas less than a decade ago, a day's catch could bring in 15,000 naira (74$). This is disastrous for the 20 million people who live around Lake Chad and depend upon it for sustenance. Those who were once fishermen now must compete for plots of land in order to transition to crop farming - a business that still keeps them dependent upon the nearby water.

In the past 50 years, irresponsible water diversion methods such as the SCIP (South Chad Irrigation Programme) have been used to maximize crop yields without accounting for the long-term health of the lake. These methods efficiently diverted water away from the lake and towards farming fields, but the channels dug ended up stymieing the amount of water that was able to enter the lake.  Though according to the LCBN (Lake Chad Basin Commission) - a committee made up of representatives of the 5 countries that border the lake - these water management attempts only had a relatively minuscule effect on the lake, compared to the changing of the climate. In a measured 30% decrease in volume between 1966 and 1975, only 5% of the decrease was attributed to irrigation methods.

Global warming is a phenomenon that is implicitly tied to all areas of the globe, and the desiccation of lakes is a trend that isn't confined to Africa. The Dead Sea (a misnomer) has shrunk at an incredible rate due to heightened evaporation levels, and the local governments have planned to pump in ocean water in an attempt to replenish the hypersaline lake. Poyang Lake in China has receded so much so that a 400-year old stone bridge has surfaced along the dried-up shores.3 These are just a handful of lakes that are at risk of disappearing due to global warming.