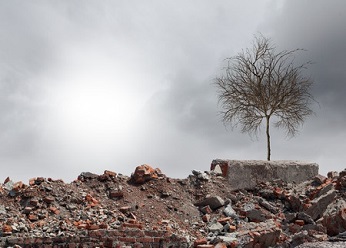 Eco-Casualties: The Environmental Effects Of War

War is invariably linked with destruction. Conflict over land usually leads to victory being celebrated on blackened soil, with more environmental damage revealing itself over time.  'Scorched earth' tactics can decimate fertile earth, rendering it virtually inert for years. Chemical weapon fallout and lead contamination can totally unbalance an ecosystem, sometimes beyond repair. The eco-friendliness of war is not exactly a priority for most armed forces. So what can be done?

Afghanistan is among the countries that are most afflicted by wartime pollution.

With the prevalence of conflict in the Middle East, Ukraine and Africa, there is an increasing demand for environmental awareness and responsibility in times of war. Doctors, health researchers and a growing part of the public are calling for more inquiries into the long-term effects of deforestation, airborne toxins and air-and-soil pollution. What was once considered 'collateral damage' is now becoming recognized as 'a serious problem'.

A post-conflict environmental assessment of Afghanistan conducted by the United Nations detailed significant cases of unnatural soil erosion, increased air pollution, rampant deforestation and shrinking wildlife populations. Both the Afghani people and the government have shown a rising concern over the barely-subterranean system of water canals known as the karez, an absolute crux of Afghan survival. Mass movement of military vehicles and frequent bombings can completely decimate sections of this crucial water distribution system. This is a very real problem for many local villages who rely on the karez for clean water.

Whereas each country has their own environmental laws to abide by, when two countries enter into conflict, the issue becomes one of international environmental law. The international laws concerning environmental liability in wartime have come under fire themselves for having no specific institution to monitor and enforce their implementation. As it stands, it's basically on the armies themselves to regulate their environmental destruction. Again, in reality - it doesn't seem to be the highest priority.

Recently, the U.S. has put forth remediation efforts such as "green bullets", a U.S. Defense program to eliminate certain hazardous materials from small-arms ammunition. In the past, numerous environmental hazards have spawned from the lead-based bullets that are standard in almost every military force around the world. This is step in the right direction from a military that has been called "the largest emitter of toxic waste in the world", and it will hopefully pave the way for countries around the world to follow suit.

The concerns of the global public consciousness is turning more and more towards environmental issues, and the more subtle cost of war - the cost to our planet - is becoming more apparent.