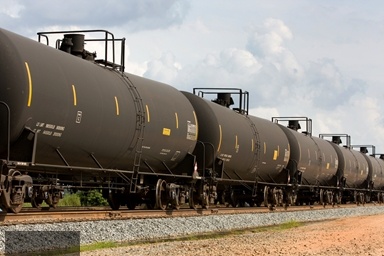 Rapid increases in North American oil and gas production have driven companies to begin transporting growing quantities of crude on trains, which may lead to the emergence of new environmental liabilities.

With oil and gas production increasing rapidly in North America, companies in the industry have been forced to improvise in recent years as a result of a shortfall in pipeline capacity. Crude transportation by barge, truck and train has grown substantially as producers have scrambled to get their products to market.

The rush to find a workable transportation arrangement has proven to be particularly beneficial for railroads. Data from the U.S. Energy Information Administration shows that the amount of oil delivered to refineries by rail quadrupled from 2011 to 2012, while truck- and barge-based deliveries have grown by 38 percent and 53 percent, respectively. In North Dakota, trains reportedly carry almost 70 percent of all oil produced in the state.

Rise of rail brings mix of benefits and risks

The Wall Street Journal noted that there are several factors companies value about railroads, such as their ability to deliver oil shipments to the markets where they will fetch the highest price. Also, unlike pipelines, producers can typically begin shipping crude via rail without committing to a time- and capital-intensive construction process.

Alongside these advantages is an increase in the risk of oil being spilled. According to the Association of American Railroads, the rate at which hazardous materials are spilled from trains is about 2.7 times higher than that of pipelines. This may translate into a serious risk, as Class I railroads in the United States are on pace to carry almost 400,000 carloads of crude, up dramatically from less than 10,000 in 2008.

Several recent incidents, such as the devastating train derailment in Lac-Megantic, Quebec, have caused alarm among members of the public. However, in an interview with Bloomberg News, Bob Schulz, a professor at the University of Calgary's Haskayne School of Business, said he does not think that the Lac-Megantic disaster will become a "tipping point" in the debate about rail-borne crude.

This opinion was also expressed by Anthony Swift, an energy analyst with the Natural Resources Defense Council, who asserted that crude shipping via rail "will continue, and its safety problems can't be ignored."

One of the two distinguished keynote speakers at the upcoming ENFOS Experience conference will be Stella Karnis, Senior Manager of Environmental Affairs at Canadian National Railway Company. Karnis will discuss the myriad environmental challenges that are facing CN today and how her company has used ENFOS to institutionalize operational excellence and effectively manage its liabilities.

Delivering the second keynote address will be Larry Schnapf, an environmental attorney with expertise in brownfields remediation. His presentation will focus on "how big data is changing the environmental industry."