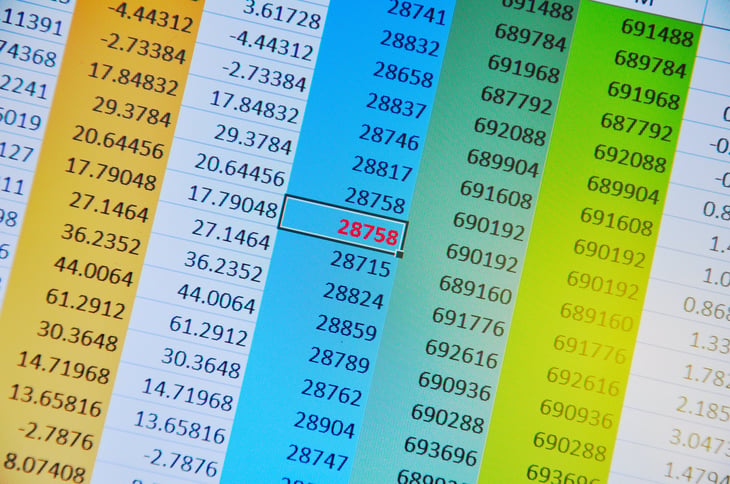 Putting together ad-hoc systems based on spreadsheets may seem like the easiest way for companies to manage information. However, while this approach seems simple at first, it can create significant complications down the road.
Research performed by the financial modeling company F1F9 explored this topic in greater depth, examining how financially costly blunders can stem from otherwise minute errors hidden in the web of spreadsheets that organizations use to manage data. Managing Director Kenny Whitelaw-Jones discussed the results of his firm's research during a interview with CNBC.

The company estimates that 88 percent of all spreadsheets contain errors, while 50 percent of the spreadsheets used by large companies have material defects. According to analysts at F1F9, there is more at stake in these cases than time and money, as major mistakes can do critical damage to a company's reputation. Furthermore, operational disruptions linked to inaccurate financial models can be exacerbated if an especially egregious oversight necessitates the termination of responsible personnel.

Analysts see 'fundamental problems' in the way companies use spreadsheets

"What we need to do is take a look at how we use these spreadsheets," Whitelaw-Jones told CNBC. "These spreadsheets underpin every critical business decision, and actually there are some real fundamental problems with the way spreadsheets are used."

Specifically, the executive highlighted the lack of industry-wide standards for financial modeling, which he said makes it easier for financial professionals to make mistakes when setting up spreadsheets and entering data.

"If we can agree on standards around how these models are put together, then it significantly reduces the risk of error," Whitelaw-Jones said.

At the same time, he conceded that "humans are still going to make errors," even with consistent standards to follow. Consequently, program managers need to account for the fact that initial assumptions and forecasts may need to be revised as underlying facts become more clear over the course of a project. This requires that information be made available in a format that is readily accessible to all key stakeholders.

"If the spreadsheet is ridiculously complex and impossible to read then nobody has a chance of actually reading it and determining if there are any errors in the first place. That just becomes impossible," Whitelaw-Jones explained.

F1F9 has released an ebook—The Dirty Dozen—that looks at 12 of the most prolific financial modeling errors of the last 25 years. Topping the list is Carmen Reinhart and Kenneth Rogoff's much-discussed research into the relationship between government debt, GDP and economic growth.

Other examples include a 1995 incident at Fidelity Magellan Fund in which the omission of a minus sign cost the organization almost $2.5 billion, as well as the U.K. government's mismanagement of the bidding process for the West Coast Rail Line in 2012. That mishap is believed to have cost the nation more than $76 million.

However, Whitelaw-Jones asserted that these incidents are "just the tip of a much bigger iceberg" and that the ubiquity of spreadsheet errors leaves countless companies exposed to hidden liabilities. CNBC's Katrina Bishop noted that a fresh example of this risk is currently unfolding, with accounting firm PriceWaterhouseCoopers being sued for more than $1 billion in connection with what plaintiffs say was "negligent auditing."

The uncertainty and risk of inaccuracy associated with ad-hoc data management systems can be particularly harmful for companies involved in environmental remediation, as budgets and timelines can be affected by numerous variables and it is difficult to obtain all critical information upfront, which often makes it necessary to revisit initial forecasts. Using enterprise software that is specifically designed for managing these complex projects can help companies reduce their dependence on spreadsheet-based systems and improve visibility into the performance of specific projects and overall portfolios.

When decision makers can view all pertinent financial, operational and compliance data through a single interface, the accuracy of cash flow forecasting can be greatly improved, as information can be considered in a broad context and plans can be created that account for multiple scenarios. Ultimately, this allows a company to establish an automated workflow with built-in financial controls, which can eliminate budget overruns, lower transaction costs and substantially reduce internal accounting expenses.

Furthermore, with the details of past assumptions and decisions preserved in the system, audits can be completed with minimal frustration.

Are spreadsheets holding your company back? We challenge you to take action. Book a 15-minute call with us and see if ENFOS can help take your portfolio performance to the next level.