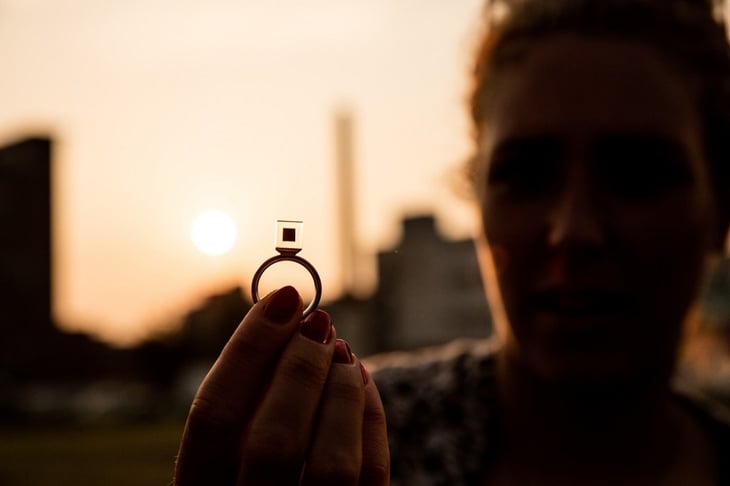 Smog May Soon Be A Wearable Accessory

Carbon capture and storage is a field that seems to be brimming with ingenuity these days.

Dutch artist Daan Roosegaarde has invented a filtration tower that is designed to capture PM2.5 and PM10 from the air- and it runs on less electricity than a tea kettle. Dubbed the Smog Free Tower, it also boasts an innovative feature: it makes jewelry out of smog particles.

The idea was born out of a 2014 trip to Beijing, where Roosegaarde was shocked by the poor air conditions. After reading about the peculiar avenues that Beijing citizens were exploring in order to get fresh air, Roosegaard decided to try his own hand at solving the smog problem. The Smog Free Tower is a 7 meter high, six-sided structure that uses ion technology to purify the nearby air. It works by first charging itself with a small positive current, which then allows an electrode to send small positive ions throughout the surrounding air. These ions attach themselves to the ultra-fine smog particles, nabbing the PM2.5 that is so difficult to capture due to its size. A counter-electrode then disperses a negative charge across the surface of the tower, which then draws in the airborne ions through its vacuum-like sides. The process leaves the surrounding air 75% cleaner - but that's not all.

The Smog Free Tower cleans up to 30,000 cubic meters of air per hour.

Once the smog particles have been collected, a mechanism in the tower compresses the particles into a gem-like stone, which is then sealed into a resin cube. The result is a strikingly black jewel that can be inlaid into rings, necklaces or cufflinks. Each of the Smog Free Cubes is derived from 1,000 cubic meters of smoggy air.

The tower just completed its first pilot test in Roosegaarde's hometown of Rotterdam, with amazing results. Already over 1,000 Smog Free Cubes have been created and sold, with the only complication being that the testing area ran out of smog to capture. This has caused the most recent orders for the Smog Free Cubes to have gone unfulfilled, but Roosegaard is confident that the tower's eventual testing in China will leave no shortage of cubes. The Smog Free Tower will visit Beijing this summer, with Roosegaarde also in talks to test in Paris, Mumbai and Los Angeles.

The Smog Free Tower Kickstarter has already amassed an amount double its goal - visit it here.