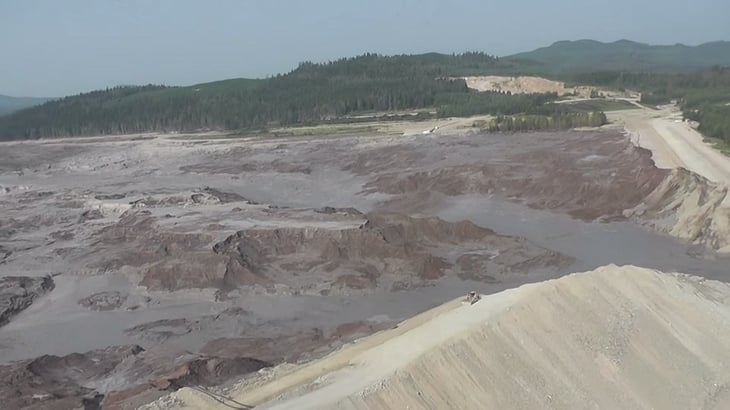 When the inspector from Olding and Associates arrived at the Mount Polley tailings pond, he knew something wasn't quite right.

“We looked at the pond and we thought there was monitoring required. We wanted an emergency contingency plan in place.... the walls were getting too high and the water was getting too high.” said the inspector.

On Monday, August 4th, 2014 - a main wall of the Mount Polley tailings pond gave way. Over five million cubic metres of contaminated mining slurry rushed towards Quesnel Lake, the largest aquatic eco-system in the area. The area became flooded with debris, with the mercury-colored rush contaminating several nearby lakes and smaller waterways. Hazeltine Creek - a (previously) small, 4-foot-wide creek - was torn open to over 150 feet wide. Water bans in the area went up almost immediately, leading to over 300 residents being left without water. A video taken shortly after the incident is available below.  2:43 shows the toxic mixture contaminating the lake. At 11:07, we get a clear shot of the breach - along with a sense of scale for the immense collection of tailings pouring out of it.

Tailings are the by-product of ore mining; the toxic slurry that remains after the majority of materials are processed at a milling plant. Once the ore is mined from the earth and transported to a nearby plant, the majority of the valuable mineral content is removed from the ore and is prepped for further refining. The leftover sludge-like material, which still contains ~10-20% of the economic minerals - along with mercury and arsenic - is permanently stored in a man-made sand embankment referred to as a tailings pond. The sludge then settles and separates, where it poses less of a threat and can be more easily managed.

Tailings are often a main focus of liability management for mining companies - and if managed responsibly - they can be contained as to not disrupt the environment. Many preventative measures surround tailings ponds, from bird deterrent systems to groundwater monitoring wells to constant inspections. Some tailings ponds have been fully reclaimed and have become burgeoning ecosystems or trafficable surfaces able to support the weight of vehicles. Alberta's Wapisiw Lookout is a famous example of successful reclamation, with the tailings pond site now a lush boreal home for bears, amphibians and more.

The anatomy of a tailings pond. (Source: oilsandstoday.com)

So how is the Mount Polley area doing today? Almost a year to the day of Canada's largest tailings ponds spill, Mount Polley Mine has received a restricted OK to partially reopen. The operators of the mine, Imperial Metals (IM), must submit a long-term water treatment and discharge plan to the B.C. government within the year. IM is now centrally focused on risk mitigation, having discovered the cause of the original breach to be poor wall design. IM spent 67$ million on remediation in the area, though there will still be testing of nearby waters and sediment for decades to come.

BC Environment Minister Mary Polak recognized that full remediation is still quite a ways away, though she announced that the work done in the past year is "truly impressive". Some locals believe the congratulatory air is premature, with local eco-tour businesses having still not recouped from the blow to the lake. The one certain thing is that this incident has forced the mining industry to honestly evaluate the construction, maintenance and risk assessment surrounding tailings ponds.