The numbers that surround the 2010 Deepwater Horizon (Macondo) disaster are sobering. 4.2 million barrels of oil sent gushing into the Gulf of Mexico. 11 lives lost. On July 2, the US Justice Department marked another significant amount in the Deepwater saga – one that looks to provide a long-awaited sense of finality for all parties, including BP.

In the largest environmental settlement in US history, BP has agreed to pay $18.7 billion to five U.S. states and 400 government agencies over a period of 18 years in order to resolve the remaining legal matters concerning 2010’s Deepwater Horizon spill.

With this settlement, BP’s total bill for Deepwater Horizon tallies up to $53.8 billion dollars spent on fines, remediation and other obligations – an amount that exceeds BP’s reported profits since 2012. Some decry the settlement as being too little, too late – while others see the unprecedented settlement as closure for wounds that have long been open. The state of Louisiana was most affected by the spill, and will collect more than $10 billion from BP – an amount that Louisiana Attorney General Buddy Caldwell cites as “a game-changer” for the state. 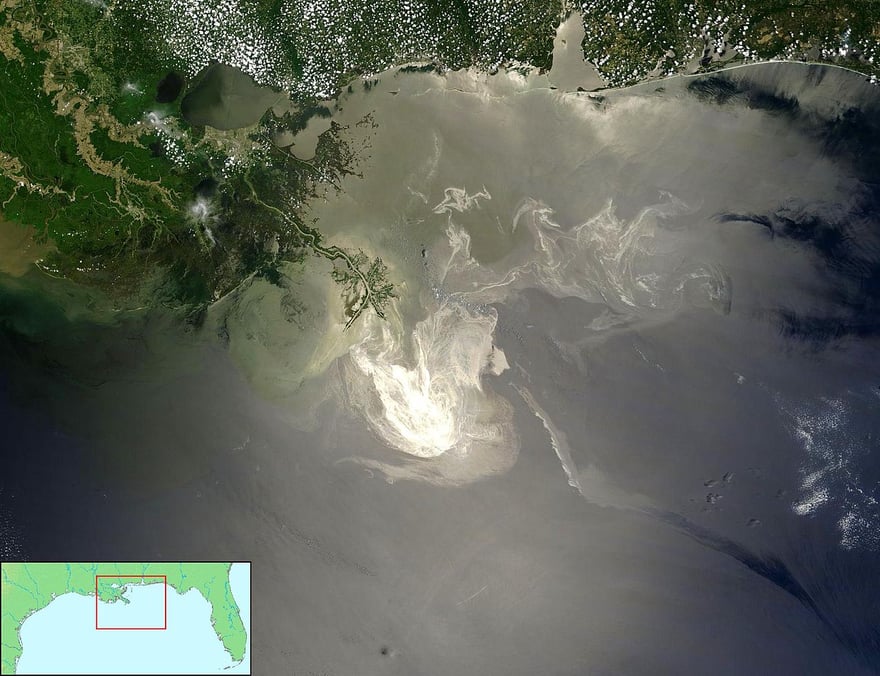 Oil-soaked water better reflects sunlight, allowing for disconcertingly visible streaks from space. (Image: NASA)
The 18-year payment plan allows BP to take the massive financial hit in tolerable increments, and though the court has yet to approve the settlement – the deal is expected to go through. The agreement also excludes any clauses that could allow for the re-opening of any litigation – something the company no doubt values after 5 years of court.
With the last of their legal matters almost behind them, the company is looking to close the book on the disaster that they’ve carried for five years. “It’s time for the company to move on,” said Brian Youngberg, an energy analyst for Edward Jones. “It’s definitely a win for BP. No company can really do well when you have such a big litigation issue hanging over it.” 1
Since the events of 2010, BP has since changed its focus to off-shore drilling – a safer set of operations that align with BP’s commitment to the health of the Gulf.  Other upstream oil and gas companies have followed suit.  Managing environmental risks and liabilities associated with any type of industrial operation is a major undertaking for these companies.  Many disciplines are involved, the services are complex, and the uncertainty is high.  Engineering and information management technologies continue to advance to help planners, operators, and environmental liability managers stay one step ahead of catastrophic events such as this one.