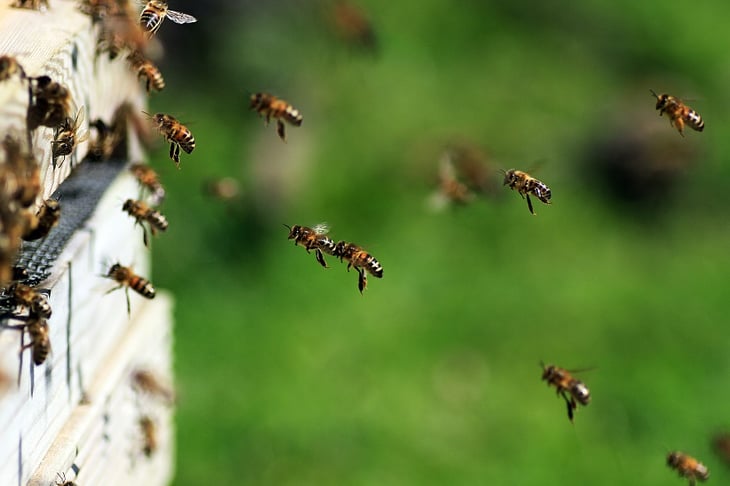 In a sort of modern iteration of the canary in a coal mine, honeybees are being enlisted by scientists to determine the air quality of a given area. The idea of using honeybees as metrics of pollution dates back to 2010, when several German airports started examining the honey of local bees for signs of air pollution. Bees nibbling on the pollen from smog-exposed flowers would show telltale signs of hydrocarbons and heavy metals in their honey. Depending on the trace contamination levels in the honey, researchers could determine if air in the surrounding area was truly clean.

Recently, an environmental monitoring study conducted by the Natural History Museum has focused on the unique property of bees that allows them to be so effective at pollination: their miniature, static-electricity generating hairs. A tiny positive static charge runs throughout the body of the bee and attracts pollen particles, causing them to stick to the bee's fur. This charge also attracts the ultra-fine airborne particulate matter that makes up a large part of industrial air pollution.

Once it has been attracted by the static electricity, the pollen sticks like glue onto the bee's body.

The scientists realized that by measuring the build-up of industrial pollution on bee fur, they can get a form of smog detection for a given area. Bees fly around 1.5 miles each day, collecting particulate matter samples as they go about their business. These widespread flights result in a more comprehensive coverage compared to ground-based air sampling. "[This method] allowed us to discern between different emission sources. Stationary observation stations allow for more accurate estimates of particle quantities, but they cannot match our new method’s ability to determine emission sources.” said Dr. Christian Mavris, one of the lead researchers at the Natural History Museum.1

They tested their method in a previously-heavily industrial area in Sardinia, where a field of lead-zinc mines had been closed down in years prior. Using the bees as bio-detectives, the researchers discovered that mining pollutants that were thought to have been long buried in soil had actually escaped into the air. The researchers concluded that the area residents' exposure to leftover contaminants could be much higher than was originally estimated. “There are lots of applications for this kind of bee monitoring,” said Dr. Mavris.